The Ghosts of Senate House is one part of a creative research project led by Sarah Sparkes. It serves as an archive for uncanny, apocryphal stories emanating from Senate House. These stories formed part of "a Magical library for the 21st Century" an archive of writings, recordings, artwork, artefacts, and other contributions, which was first shown at the University of London as part of The Bloomsbury Festival October 2011.

Bloomsbury is today one of London's more genteel and pleasant areas, an attractive place that draws tourists from around the world. The numerous Universities give the place a studious, academic atmosphere. Lovers of literature throng its squares, walking in the footsteps of Virginia Woolf, Lytton Strachey and W.B. Yeats. The more esoteric-minded visitor may be drawn to Bloomsbury because of the British Museum, and its consequent associations with Wallis Budge, MacGregor Mathers, Aleister Crowley and (again) W.B. Yeats. A pleasant, scholarly neighbourhood. But one hundred years ago it had a very different reputation. Recent research by Dr Jan Bondeson has found the entire area - from Euston station down to Russell Square tube - was thought of as the 'Murder Neighbourhood' par excellence. 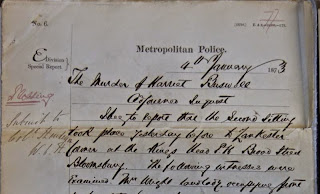 During the 19th century, Bloomsbury's once well-to-do town houses had fallen into decay and disrepair. Converted into flats, they housed down-at-heel people, criminals, prostitutes - the area became known for its transient population. A series of gruesome murders - some unsolved - gained the area an unenviable reputation. 12 Great Coram Street (now Coram Street), 4 and 12 Burton Crescent (now Cartwright Gardens), 4 Euston Square (now Endsleigh Gardens) were all the sites of gruesome murders of women. (Why the preponderance of the numbers 4 and 12? No doubt a kabbalist might shed some light). 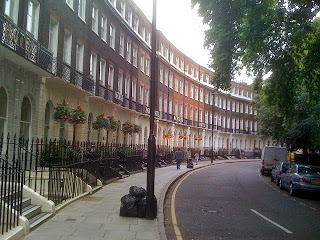 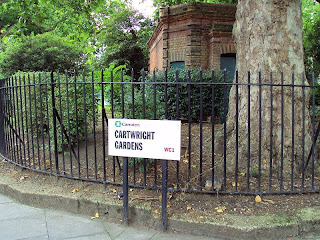 Just as the name Rillington Place was changed to Ruston Close, in order to spare residents' embarrassment and shame, so too were several of these notorious street names altered.
Some of these addresses are no more, victims of the Euston Station redevelopment or of the expansion of local university buildings. Perhaps this is not a bad thing, since (we are told) "the murder house at 4 Euston Square kept its sinister reputation for decades to come: it was reported to be haunted, and strange groans and screams were heard...The bloodstain on the floorboards in the murder room could not be removed by any amount of scrubbing, and no dog would pass this room of horrors without snarling, whining and giving indications of intense terror."--Fortean Times no.318, Sep.2014 (p.46).

But 3 Bernard Street - where the unsolved murder of a young prostitute, Esther Praeger, too place in 1908 - still stands. It is very near Russell Square station and is now a souvenir, confectionary and tobacconists' shop.

Fortean Times no. 318 (September 2014) features an in-depth article by Dr Bondeson on Bloomsbury murders and their locations, and his book Murder Houses of London (Amberley Publishing) will be published later in 2014.
Posted by Chris Josiffe at 06:24